​Here are some numbers from the past 18 days in Thailand and the Philippines:
Facilitating Transformation
We closed out the formal part of the training event with a group of Lisu youth outside of Chiang Mai, Thailand by handing out the diplomas and profusely thanking our translator, Esther. We thought all that was left was the group photo but the participants weren’t finished. They respectfully asked to speak.

We were prepared for a warm thank you or maybe even a flowery expression of how much the event meant to them, so we were caught off guard when John stood up and said expressively:
“You have been like very large hammers.”
He acted out hammering with a giant mallet so his point didn’t get lost in the translation from Lisu to English.
I assumed that he was referring to our persistence in asking them questions and waiting for a response. Throughout the three days we had continually asked for feedback and since three of the ten participants didn’t respond, ever, it meant that John, who had no fear of speaking, was a regular responder.
John continued:
“We have before us a large rock. A very large rock.” He gesticulated, expressing the size of the rock – more like a boulder really.
We continued to be puzzled, but he went on`;
“…and inside that rock is a jim. We did not know the jim. But now we see the jim. Thank you.”

I’m assuming Esther meant to say “gem.” The picture of a quartz agate hidden inside and ordinary rock till it is split open jumped into my mind and since the analogy began to make sense, we’ll assume that’s what John meant.

John’s insight encouraged us that God had us there for His purposes. Our heart’s desire is that it plays a catalytic role in helping the Lisu reach their younger generations with the Good News and help them model abundant life which doesn’t come from the easy money of the sex industry or drug running which they have the reputation for excelling at.
Training Trainers
Our translator, Esther, is a highly esteemed Lisu woman who had taught at a Bible school in Myanmar before moving with her family to Chiang Mai, Thailand. She now works in women’s “empowerment” ministry, helping women find ways to earn money from their villages so they don’t move to the city and get sucked into the sex industry. She had translated the text for the youth leader’s manual and agreed to be our translator out of solidarity to her community rather than an interest in youth ministry. But as time went by she became more and more interested in the learning tasks and content she was interpreting. The last day of training, I asked her to facilitate an activity to avoid the time consuming work of translating content that she had already translated for the manual. She said, “I am very interested in becoming a trainer. May I use these materials with others? They are relevant and biblical.” We enthusiastically said, yes, and let her know having people like her use these materials to train others was why we'd developed them. We look forward to seeing what God does with the seeds planted there. 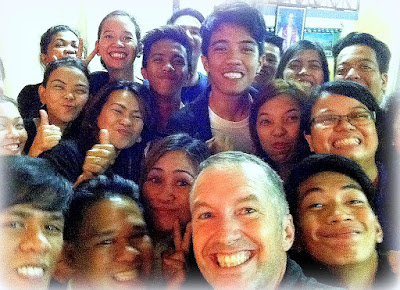 In the Philippines, some of the youth leaders and pastors who were at our first 3-day event partners were so captivated by the workshop, and so eager to become trainers that they got up at 4 a.m. to journey 3 hours across Manila in heavy traffic just to experience it again and understand the methodology better. We thought that they would learn more by training with us than just by participating a second time so we gave them a few activities to facilitate. As it turned out the other participants had understood the event would start an hour later so we spent that hour explaining the methodology a bit more in depth and assigning tasks. Once the event got going, they worked well as a team, delighted in leading their sections and were eager for feedback. We were thrilled by their enthusiasm and teachability. 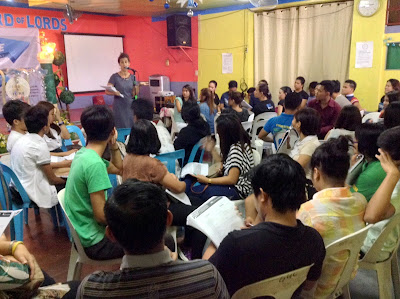 Trial by Fire
This trip honed our skills as facilitators and put the curriculum on trial because each of the six workshops we led was unique... different number of days and hours for the training, 3 different languages, and vastly distinct cultural contexts. At the 1.5 day training in Philippines we covered more content than we did in 3 days with the Lisu. With the pastor’s alliance in Tondo we arrived thinking we had from 9 am to 4 pm but were informed we only had from 10 am to noon. After we had taught a bit they told us we could have until 1 pm. We took that as a compliment. Despite the modifications and contractions, the design and flow of the curriculum allowed us to identify which objectives we could expect to accomplish well in the given time and choose those most relevant to the participants. That gives us confidence as facilitators and creates a great learning environment for the participants.

Some high praise for the training came from a short term missionary serving in Thailand with Youth Hope. She sent this letter to our good friend and founder of Youth Hope, Aaron, who passed it on to us to encourage us and we do the same to encourage you because without you this wouldn’t have happened!


Hey guys,
I just wanted to reiterate what I said about the training in our group time.  First, I am so happy that I was able to experience a Youth Hope training, as I have never had the opportunity to before.  As I said, I had no idea what to expect.  I was thoroughly impressed with the curriculum and the professional attitude it was presented in.  As someone who has a teaching license and been involved with countless youth opportunities, Young Life, etc., I really felt like the information was new and fresh and fun.  The biggest thing for me was that I left to go back home feeling so passionate about being here and ministering to youth.  I felt re-energized and ready to put 100% into the ministry PYF does.  I got so emotional on that last day and consequently spent the morning in prayer the next day, crying out to God for these youth workers because of their hearts for these kids.  I think you really brought it home with your point on Wednesday, when Jesse said, "Why is it worth it?" (despite all the barriers they had put up on the board).  And then he said, "Is it worth it?"  The workers were pretty quiet at that point and inside I was getting emotional because my heart broke for these youth workers who are putting so much into this, some their whole lives.  It gave me a passion and an energy to be all in for this as well.  Jesus cares about youth, so we need to care about youth.  Bottom line.
I think it was crucial for me to see and participate in this training at this time and I really won't forget it.
Thank you for all you do for youth and youth workers,
Allison

What a great summery of your trip and ministry during all of it. We were thrilled as I'm sure you were with the letter that you received
from Allison. So nice that she took the time to do that and open up her feelings for you to know. We know that you are like gems and what a fun way for them to look at your teaching and how the Holy Spirit opened up the rock for them to understand God's Word and how to better reach the youth with it. Love and Prayers, Mother & Dad

I really love your blog. it is filled with amazing content. your writing style conveys your cool demeanor really well and makes me read your posts more and more. keep writing
-Schoollog School Management Software