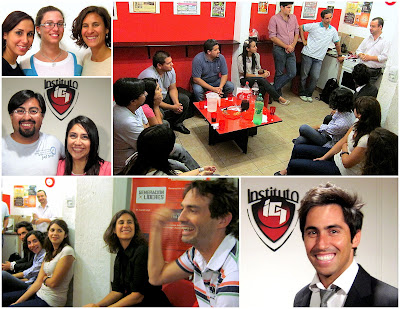 Here are a few reasons I got teary during the orientation for new students at the EJ Institute last week:

1) We love our highly-committed students
Because Tim and I are no longer doing the school’s admission interviews, new student orientation feels like Christmas morning. This year we have new international students from Chile, Colombia, Mexico, and Brazil as well as whole group from Buenos Aires. We look forward to getting to know them as we teach our classes this trimester, as well as anticipating reconnecting with others we’ve known for years but who are just getting around to taking our classes.

During the orientation we asked everyone how long their commute is to the Institute. The most common answer was about hour and a half, one way. That means they make a three hour trip for a three hour class!

2) We’re grateful for the fantastic staff
It’s fun to watch the staff in action with their enthusiasm, love for the students and the academic and administrative gifts needed to keep the institution healthy especially when I think back to the days when Tim and I used to open the door for the students before class, lock the doors at night after class and do much of what happened in between.

During the orientation I kept having flashbacks to the chaos, uncertainty and exhaustion of the first year of classes, for example when students and professors alike were confused because we had three different documents circulating about how students should do their projects. (Now we have a professionally produced video that explains each step but even more importantly both the teachers and the students have assimilated the process.) I think everyone is happy to have those days in the past.

3) We’re pleased with the school’s DNA
Holistic care for students, which models the type of relationships we hope they have with the teenagers they work with, intellectual stimulation as a result of the academic rigor, immediate application of principles learned in class to teenagers through class projects, and the development of a long-lasting community are some of the core values we have worked to include in the EJ Institute.

As the academic director interviewed a number of older students, some on site and others who joined us from their home countries by Skype, their comments revealed the extent to which these elements characterized their experience. Here’s a sampling:


Don’t miss out on really getting to know your professors and classmates. They are your new family and will be there for you in the hard times that might be ahead.

The Institute made my brain explode. I’ve learned so much that I’m not the same person I was before I came here.

The best part of the Institute is the Desafio – enjoy it!